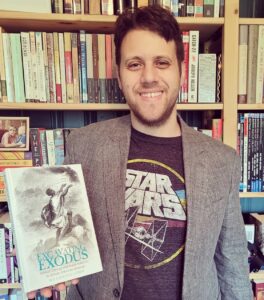 How do oppressed communities strive for freedom? They might elevate a charismatic leader to advocate on their behalf. They might patiently await deliverance from higher powers. They might leave their homeland in search of a better life elsewhere. These disparate strategies coexist in the Exodus narrative. As an archetypal story of liberation from slavery, Exodus has profoundly shaped how Americans have understood the struggle for freedom. Whereas the Puritans experienced their migration to the new world as an exodus from corrupt Europe, enslaved Africans felt that their suffering recapitulated the ancient Hebrews’ bondage in Egypt. Although Exodus has perennially served to mobilize resistance to oppression, black writers radically reinterpreted its meaning over the past two centuries. By asking how Moses became a touchstone for notions of racial solidarity, Excavating Exodus illuminates how black intellectuals increasingly problematized the Mosaic model of charismatic male leadership.

Excavating Exodus analyzes adaptations of Exodus in novels, newspapers, and speeches from the antebellum period to the Civil Rights era. By examining African American writers from the 1820s to the 1960s, this study shows how the Exodus trope shifted through abolition, Reconstruction, the Harlem Renaissance, and the Civil Rights movement. Changing interpretations of Moses’ story reflected evolving conceptions of racial identity, religious authority, gender norms, political activism, and literary form. Moses transformed from a paragon of race loyalty to an avatar of authoritarianism. This study reveals three major versions of Moses: Moses as a model of heroism to be imitated, exemplified by David Walker, and Frances Harper; Moses as the antitype of an idealized contemporary leader, exemplified by Martin Delany, Martin Luther King, Jr., and Malcolm X; Moses as representing overbearing charismatic authority, exemplified by Zora Neale Hurston, Ralph Ellison, and William Melvin Kelley.

Drawing on leading theorists of racial solidarity, I identify a rhetorical tradition beginning with David Walker that treats Moses’ loyalty to his fellow Hebrews as his defining characteristic. Frances Harper followed Walker’s example but creatively stretched Exodus to encompass an ensemble of mixed-race Mosaic heroes. I introduce the concept of typological plasticity to convey how more than one figure can operate as Moses. In contrast to the expected one-to-one correlation between type and antitype, typological plasticity allows multiple, even conflicting, parallels to proliferate within a single text.

By the twentieth century, a vocal minority of black writers viewed Moses’ story as a compelling way for male leaders to sanctify their power. Gendered perspectives profoundly shaped attitudes toward Exodus. While in 1892 Frances Harper depicted women as Mosaic leaders who sacrificed their own self-interest for the good of their race, by 1939 Zora Neale Hurston exposed how Exodus licensed patriarchal violence. These two modes of interpretation co-existed throughout the twentieth century. This study demonstrates that Ralph Ellison and William Melvin Kelley forcefully critiqued Exodus at the very moment when Civil Rights leaders, such as Martin Luther King, Jr. and Malcolm X, turned to Exodus as a narrative framework to mobilize black collective action. In tracing Moses’ shifting role in African American literature and culture.